There has been a lot of talk in recent months about freelancing and travelling at the same time or going on holiday as a freelancer. I would like to discuss my experience. In December and January, I spent two weeks in Marrakech before travelling to Paris overland via Fes, Chefchaouen, Tangier, Tarifa, Granada, Seville, Madrid and Barcelona  – a trip lasting five and a half weeks. The main reason I decided to do this, apart from wanting to travel, was to re-immerse myself in my source languages – French (which is widely spoken in Morocco) and Spanish. 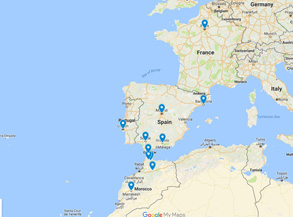 Impact on my business

I chose to travel during the Christmas holidays, a period which is normally very quiet for my business. I used my out-of-office auto-reply to explain that I was on holiday. However, I took my phone and laptop with me in case I had to reply to any urgent enquiries from existing clients. Indeed, one such event occurred and I had to shut myself away in my hotel room for a day to manage a last-minute translation request. Being able to access the internet also meant that I was able to keep up-to-date with news, social media and the development of my new website. Overall I found it remarkably easy to keep on top of things, although I have had a lot of catching up to do regarding marketing and administration since I got back.

That is not to say that my trip was not without its problems. In several of the hotels where I stayed the wifi access was less than adequate and I found myself having to search for nearby wifi hotspots in order to send important emails. The other main difficulty was peoples’ attitudes to my working while on holiday. I was occasionally accused of being “a bit anti-social” or “a bit of a workaholic” by my fellow travellers. However, they soon changed the subject when I pointed out that I can do my work from anywhere in the world and did not have to return to a stuffy office by a certain date.

Mixing business with pleasure may not be for everyone but it is a good way to justify to yourself taking a long break from the cold British winter.

See samples of my French into English work

See samples of my Spanish into English work

A Review of “Financial Markets and Accounting for Translators”

Why being bilingual is not enough

We use cookies to ensure that we give you the best experience on our website. If you continue to use this site we will assume that you are happy with it.OkCookie Policy