This post highlights the issues involved when choosing translators.

A few years ago, I needed to have some marketing materials translated into French and Spanish.

I mentioned this to two friends (a native French-speaker and a native Spanish-speaker) whom I had met on a translation course. They offered to translate the materials if I translated marketing materials into English for them and I agreed.

However, as soon as I received the translated texts I noticed grammar and terminology problems. When I showed the texts to French and Spanish colleagues, they confirmed my fears. I had poor quality translations which would do nothing for my professional reputation. After asking for recommendations, I contacted a colleague who was able to arrange for the materials to be re-translated to a professional standard. I later discovered that while both of my friends had taken a translation course, neither of them was working as a translator. 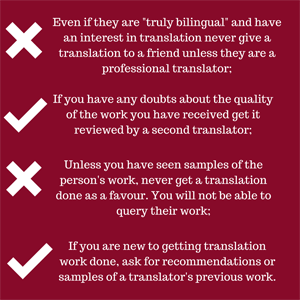 This experience illustrates what any professional translator will tell you:

– Even if they’re “truly bilingual” and have an interest in translation never give a translation to a friend unless they’re a professional translator;

– Unless you’ve seen samples of the person’s work, never get a translation done as a favour. You won’t be able to query their work;

– If you’ve any doubts about the quality of the work you’ve received get it reviewed by a second translator;

– If you’re new to getting translation work done, ask for recommendations or samples of a translator’s previous work.

If I’d considered these points when choosing translators to work on my marketing materials, I would’ve saved myself a lot of time and energy.

Review of online business courses and their relevance to translators

Working with translation agencies – my experience